According to 360 View: Entertainment Services in the US, pricing pressure for consumer services is forcing increasing conflict in carriage negotiations, which in turn fuels the interest among providers in continued vertical and horizontal consolidation.

Self-reported expenditures on non-pay-TV home video entertainment also declined 30% per month over the past seven years, peaking at nearly $40 in 2014 to slightly over $20 at the end of 2018, according to the study. Spending on DVD and Blu-ray packaged media has steadily declined since 2012, while spending on movie theaters declined by 50% from 2014 to 2018. Spending on internet video is the only category to hold steady throughout the time frame, staying at $8-9 per month since 2014, showing the power of streaming and downloaded content from the internet. 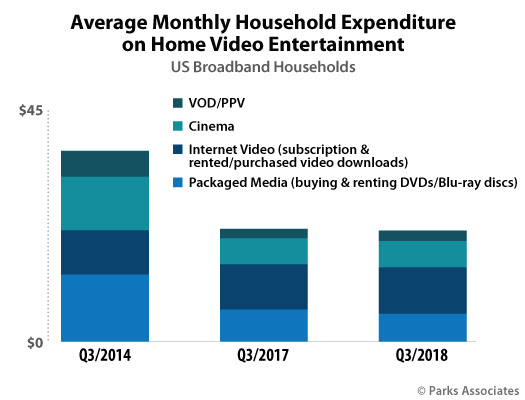 “Traditional pay-TV providers (MVPDs) have faced continued subscriber losses due to increasing consumer choice from OTT services, so they are deploying skinny bundles and vMVPD services to create more choice among viewers,” said Elizabeth Parks, President, Parks Associates. “For pay-TV service providers, traditional and online, they are exploring new areas in content ownership and development, and to be successful in these efforts, understanding consumer activity and motivation related to adoption and use of their services is critical.”

“Subscription online video is the only growth category for consumer-paid video entertainment beyond pay TV. Operators, struggling with declining ARPU for standalone pay-TV services, are anxious to leverage this trend,” said Brett Sappington, Senior Research Director and Principal Analyst, Parks Associates. “Operators are taking differing approaches. Some, including Comcast and DISH, are offering subscriptions to third-party OTT video services and are integrating them into their discovery interfaces. Partnering gives operators a chance to serve as content aggregator, a familiar position. Others, including AT&T and DISH, are expanding their competitive reach online and have introduced vMVPD services.”

360 View: Entertainment Services in the US provides a comprehensive view of the US marketplace for pay-TV services, including changes in adoption, services taken, churn, and spending among key consumer segments, including upgraders, downgraders, new subscribing households, cord cutters, cord shavers, and OTT subscribers. It also assesses demand for entertainment service features and compares perception, demand, and use among leading US operators. Other highlights:

20% of US broadband households do not have a pay-TV services.

NPS for traditional pay-TV services is weaker than for other content service types.

12% of US broadband households eliminated pay-TV service (cut the cord) in 2018.

For information on 360 View: Entertainment Services in the US, contact sales@parksassociates.com. To schedule an interview with an analyst or to request specific research data, please contact Sherrelle Lewis at sherrelle.lewis@parksassociates.com, 972-996-0214.

To learn more about this exciting job opportunity, click here.

Wanted: Security Pros Looking to Sell Spare Security Equipment | #TpromoCom #CCTV #business #Facebook | You’re invited to join the CCTV Security Technician Buy and Sell (Professionals Only) Forum where you can buy someone else’s spare equipment, sell your own stuff, or trade your goods for someone else’s. http://bit.ly/2AkwgWt

“The mission of the CCTV Security Technician Buy and Sell (Professionals Only) Forum–a closed group on Facebook–is to provide the appropriate setting where professionals can buy, sell, and trade equipment and services related to CCTV (security only please),” says Al Colombo, long-time technical writer and administrator #1 on the forum.

“Our main focus is CCTV and video surveillance equipment including network related items, such as routers, managed and unmanaged switches, NVR’s, DVR’s etc.,” says Sean Sokoly, administrator #2 on the forum.

When you join the buy/sell/trade forum, you are automatically entered in the CCTV Security Technician Forum, the main group on  Facebook. This is a group place to share information, ask questions, and help others with problems that you may have already experienced.

Comcast Slapped With Patent Infringement Charges by TiVo | #TpromoCom #TiVo #Comcast #patent #lawsuit |  Comcast Corp. (CMCSA – Free Report) , the leading cable multi-service operator (MSO) in the U.S., has been reportedly slapped with patent infringement charges by TiVo Corporation (TIVO – Free Report) in relation to its X1 platform. The suit claims that Comcast’s X1 set-top boxes are infringing on at least eight of the patents, which are held by Rovi Corp.

TiVo was acquired by Rovi in 2016 and the merged entity is known as TiVo, which attained ownership over more than 6,000 patents. To read the remainder of this news story, click here.